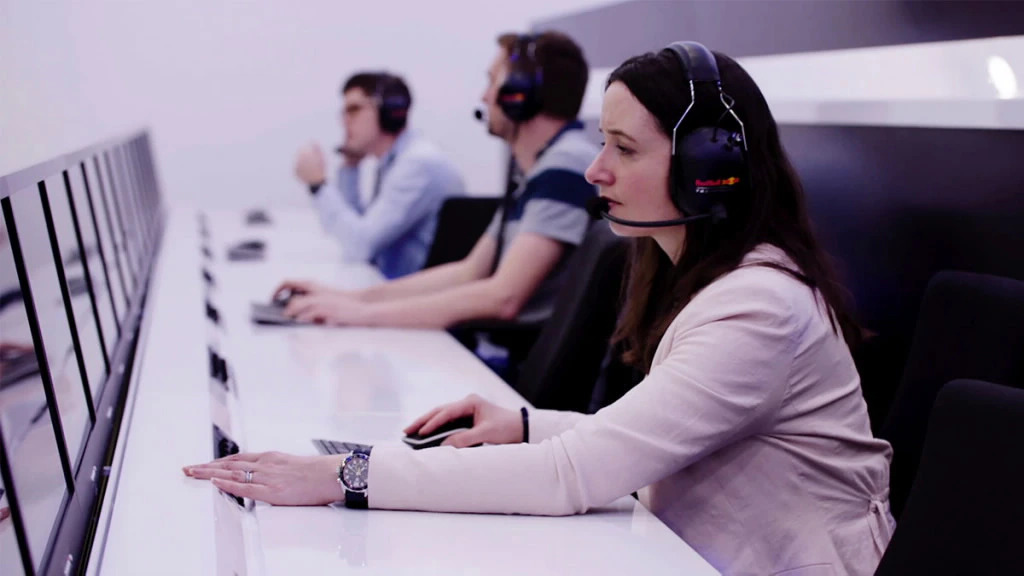 In the fast-paced world of Formula One, the job of a race strategist requires remaining calm while helping to make decisions that can make or break a team’s result.

Strategists like Hannah Schmitz must offer recommendations such as when to pit, what tires to use, and how the team’s drivers should work together, all of which factors in to how a driver finishes.

These high-pressure strategy decisions are part of what makes Formula One so exciting to watch. But the thinking—and the calculations—that Schmitz and her teammates put into these in-the-moment calls begin weeks before a race. It’s this high level of preparation that helps strategists earn the drivers’ trust.

“Data goes into every decision we make,” Schmitz says. “Before we even get to the track, our simulations will have what we expect the tires to do, what we think the overtaking will be at that track, and all the paces we’re expecting of our competitors and us. And then when we’re at the track, we can use data to better estimate all those variables. Basically, we’re constantly using the data and refining those models.”

As principal strategy engineer for the Oracle Red Bull Racing F1 team, Schmitz and her teammates analyze key factors by testing billions of scenarios and combinations using Monte Carlo simulations running on Oracle Cloud Infrastructure (OCI), all to give drivers Max Verstappen and Sergio Pérez the best chance to stand on the podium.

“It’s a key role, sitting trackside on the pit wall, utilizing all the data and information to make decisions about race strategy,” says Christian Horner, team principal and CEO for Oracle Red Bull Racing. “That role is the linchpin.”

A graduate of the University of Cambridge with a master’s degree in mechanical engineering, Schmitz found her way to Red Bull Racing in 2009 as a student intern. She quickly turned that into a permanent role as a modeling and simulation engineer, then became a core part of Red Bull Racing’s strategy team.

“I worked in vehicle dynamics, at first doing modeling and simulation work, and then after a while, I just felt that I really wanted a more direct connection with racing, and the role came up in strategy,” Schmitz says. “I made the move across to that department, and I’ve been there ever since, nearly 13 years now.”

Schmitz is among the small yet growing group of women with high-ranking roles in F1. She hopes her position gives confidence to the younger generation of female talent looking to break into the business.

“A diverse team is a stronger team,” Schmitz says. “I think to have people of different genders, from different backgrounds and ethnicities, that is really important. Growing up, I didn’t see a lot of women in motorsport, so I really want to help encourage the next generation and say, ‘Yes, come and do it!’ It’s an amazing job, and I absolutely love it.”

In the lead-up to an F1 grand prix, Schmitz and her team create a preview report that looks at all the potential strategies the team might follow on race day. The report incorporates an abundance of data, such as recent race analysis and historical data for a specific track to help predict tire and car performance. They’ll model what happens if there’s a crash at different spots around the track, at different points in the race. They’ll consider the weather forecasts and factor in the odds of light or heavy rain—plus many, many more scenarios and possible outcomes.

By using a modern technology stack on OCI, the team last year was able to increase by 25% the number of Monte Carlo simulations it could run, allowing the team to explore more variables and increase the accuracy of simulations.

Once the team is trackside, Schmitz analyzes data from practice and qualifying races, focusing on variables such as current track conditions, the pace of the car, and tire degradation to further evolve the team’s strategy and map out pit stops. Competitor analysis is another crucial component that helps Oracle Red Bull Racing determine how to navigate rival strategies during a race weekend. As the race unfolds, and these possibilities become reality, strategists continue to quickly model scenarios and offer options that give drivers the best chance to succeed.

While F1 teams have an arsenal of tools and technology to assist with strategy, the teams are bound by regulations set by the Fédération Internationale de l’Automobile (FIA). For the 2022 season, teams are limited in the time they can spend on trackside modeling and simulation. To manage the time restrictions and spending caps, Oracle Red Bull Racing relies on the power of simulations that they run on OCI.

“Monte Carlo simulation is basically a way of using randomness to solve a problem,” says Schmitz. “We can come up with plots showing us our expected point score based on certain strategies. And you get some nice curves, and you can see where the peak of those points is. And that helps us decide how many stops we’re going to make, and which tires we’re going to fit, and what laps we might want to think about pitting on.”

Using the power and flexibility of Oracle Container Engine for Kubernetes to containerize the team’s simulation application, and running on Oracle Cloud’s Arm-based virtual servers, the team can scale up its simulation platform while keeping costs within the sport’s tight spending regulations. “Using Oracle will allow us to run more simulations, look at more things, and have an edge on our competitors,” Schmitz says.

Tire use offers one specific example of a decision facing Schmitz and her teammates. Each F1 team has the same quantity of tires they can use during a race weekend based on regulations, so deciding which tires to fit for each race, and each part of a race, is an enormously crucial strategy decision. The freshness of the tires directly impacts the pace and performance of the car, so getting that right can translate into a boost that helps win a race.

This was evident in the 2019 Brazilian Grand Prix, when Schmitz made a call to pit Verstappen for a third time even though it meant handing the lead to his pursuing rival. It was a risky call, but with a fresh set of tires, Verstappen was able to quickly regain the first-place position and win the penultimate race of the season. In a career highlight, Schmitz joined Verstappen on the victory podium and collected the Constructors trophy for the team.

But no one on the Oracle Red Bull Racing team dwells long on past glories. Schmitz’s competitiveness always has her thinking about the next race, looking for ways she can innovate and use technology such as OCI to give the team an advantage.

Career path: Engineer to strategistModels on OCI show probability of victoryPlanning for F1 success
follow us